The farmer and owner of Mara Seeds knows what can happen when you don’t – his 8000 acre station 50 kilometres to the west of Casino has seen worse times than today’s verdant organic crops and cattle pastures.

The northern NSW business began in 1967 as a company producing pasture seeds for export to the United States and the Middle East. It was a successful formula – but a formula that depended on the use of fertiliser at “heavy, heavy rates.”

“We managed to actually destroy some of our soils over that 20-year period,” explains Stuart, who reached a turning point while on a research tour of the US. There, he was introduced to the sustainable farming methods of the Amish people. What followed was a move that left many of Stuart’s peers scratching their heads and the farmer himself without a solid market to sell to.

“Everyone said we were mad, and they might be right, I’m not sure,” says Stuart who, in 1996 took the leap to become an organic producer.

“Back then, I can honestly say, we were the odd ones out. People said ‘You’ll finish up in the poorhouse’. But we didn’t have much choice.” He knew that he had to put the land first and innovate.

It was a long, expensive risk that paid off. Mara Seeds is now a leading name in Australia’s organics industry – and instead of exporting the organic seeds, beef, soybeans, fertiliser and compost he produces, Stuart now sells mainly to his home market. After many years of living with the reverse, costs in organic production are now less than those in synthetic agriculture. Mara Seeds’ current output of maize, soya and winter wheat alone is around 6000 tons a year.

Sandwiched between the coast and the tablelands, Mara Seeds sits on country that has the good fortune of being protected from cyclones. The land was once logged for teak timber, but nowadays, views of the Larsson family’s farming operations are filled with trees. The rolling hills take care of drainage, rainfall does the watering. After stints away from farming, the soil, he says, is the one thing that he has always come back to.

Pushing 70 – “an old bugger,” Stuart jokes – is no barrier for the farmer whose kitbag is fuller than ever. Family is central to his business and one of his 22 staff is his daughter, who manages IT and marketing. His son runs offshoot Mara Global Foods, specialising in gluten- and allergen-free foods.

Stuart laughs off the unusual claim-to-fame that, at one stage, his face adorned tofu packets in Korea thanks to the trade in soya he did with the country. His latest honour is less leftfield: Mara Seeds is Kyogle and District Chamber of Commerce’s Primary Producer of the Year 2017.

The constant developer – Stuart quips that his property is a “large experimental station, because anything we talk about, we do” – is working with Central Queensland University to research the use of biochar (carbon-rich charcoal) in animal feed. He has invested in a biochar unit that will not only create organic fertiliser and stock feed, but produce electricity, replace LPG gas and run the company’s power generators, all with zero emissions.

“The only thing I wish is that when you get to a certain age you could start going and getting younger,” he says, excited about new opportunities, technology and alternative farming methods. And while embracing change is fundamental to his business philosophy, he remains aware that it is often the harder path to take. 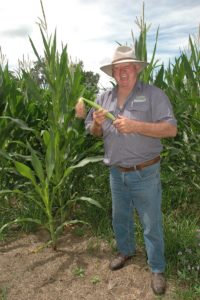