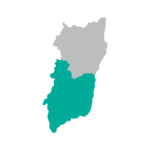 If you happen to be in the ‘jacaranda city’ of Grafton or its surrounds and you see a big blue truck out on the roads, the chances are its part of the Herb Blanchard Haulage fleet.

These iconic vehicles are likely to be transporting power poles for one of several clients that serve the vital infrastructure of the Northern Rivers.

Robert is the son of the business’s founders, Herb and Noreen, who started out in 1955 with just one truck driving fresh fish between the Northern Rivers and Brisbane. The Grafton-based company now employs about 30 people and has even established a separate arm of the business, Blanchard’s Bricks and Pavers, serving the local building industry.

“My mother, my brother and I took over the running of the business from our dad after his passing in 1984,” says Robert. “The business has grown significantly over this time thanks to gradual growth as well as business acquisitions.”

Herb Blanchard Haulage is firmly at the heart of Grafton’s community. In 2015 the company’s sponsorship of the Grafton Cup race meet resulted in the cup being named the Blanchard Haulage Cup for that year, while the business takes its role as both a service and an employer in the Northern Rivers very seriously.

“While we know just how important our customers are, we also never underestimate our employees and how much they give to the business.”

He adds that the growing population in the Northern Rivers is helping businesses such as his to thrive. As the area expands, Robert believes, “more goods and services will be required to build more homes and industry.”

As a long-term resident and businessman in the region, Robert is well placed to gauge how far the Northern Rivers, and the Clarence Valley in particular, has changed over the decades – and now seems to be as good a time as ever to be operating in this idyllic area.

“People are moving here so the construction industry is in good health and we also are seeing the benefits of the Pacific Highway upgrade, along with the second bridge over the Clarence River in Grafton and the new Grafton Correctional Centre.

“All of these major infrastructure projects are adding to the Clarence economy strength.”